The Cost of Escape 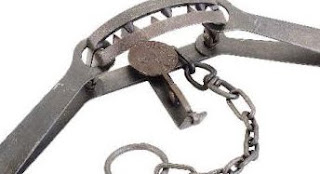 Large, wet snowflakes crashed to the ground like empty meteors. The storm worked hard to cover up the large, deep paw prints of the heavy-set animal. Our already maladroit steps became more-so as we made an attempt to keep up with the storm: losing the tracks would cause our trip to end in failure. Just past the ridge of the foothill, my foot finally slipped and I slapped down on my back, then slowly slid the next several feet. I skidded toward a thicket of skinny, naked dogwoods at the bottom of the hill. The tracks had meandered down here and disappeared.

I lifted myself from the snow that had built up during my skid with the kind care one would employ in moving something delicate or fragile; I wasn’t about to go down like that again. Not wanting to expedite the trip as I had, my comrades made their way down slowly and gingerly,looking for places to plant their feet, then moving one step at a time. I trudged on and entered the small grove.

The tracks veered away from the path to the right, through several trees. They came back, crossed the path and disappeared to my left this time. Three, four, five times wolf prints criss-crossed the path through the coppice that rested in the bosom of the foothills. After the last swing to the left, they didn’t come back, so I followed them through empty shrubs and around thin poles of tree trunks. They were becoming increasingly difficult to see, as the crashing snow had grown into even more of a blizzard than before.

Finally, I stood still. I lost sight of the guiding purpose of this expedition. I listened as the crunch of my companions’ footsteps stopped, directly behind me. We surveyed the landscape for paw prints.

I don’t know who saw it first, but one could hear as each had his breath catch in his throat, upon seeing the mess.

The snow had certainly experienced a disturbance, as it had been scattered all directions. Blood, squirted and splattered all over the place had long since turned brown after exposure to oxygen. The snow had been working at placing a veil over it for a while now, but it still stood out as something so gruesome should. In the middle of it all, a brand-new steel trap lay, with the lower half of a wolf’s leg still lodged between the metal teeth that had caught it not long ago.

The rest of the wolf had gotten away. A trail of blood and disheveled snow led the way. Somewhere, an angry, hurting wolf was still alive.

Jesus Said, “It is better for you to enter into life maimed, rather than having two hands, to go to hell, into the fire that shall never be quenched . . .” (Mark 9:43)