by jake on December 5, 2009
Bodies popped and writhed. A few bounced. Colored light flashed, swept and danced as it was caught midair by thick smoke. Bass rumbled from giant speakers. Wall-flowers watched, conversed and sucked on cigarettes. Others ordered drinks at the bar. 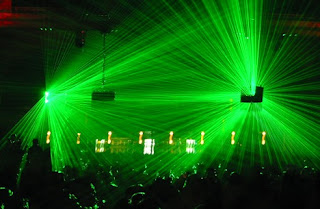 them their beers. The man and his friend turned around to look at the dance floor. They searched for women that looked like fun. Their eyes swept the crowd and made judgments on each.

“Taken, too tall, too big, too loud. . . Look at her little hands! That’s weird.
Wait. There’s the one.
I’d like to hit that.”
Who hasn’t been in that place? You might not have said those exact words, probably weren’t in a dance club because everyone knows that most of them fester with disease on a nightly basis and frankly, that’s unfortunate as well as disgusting, but we’ve all been in a similar situation. We’ve all looked at someone or something for what we can get out of them. Did we care about anything else? Perhaps not. If we only look at things for what we can get out of them, there might be a little bit of idolatry in it.
You can be sure that using people or religion or things
just for what you can get out of them-
the usual variations on idolatry-
will get you nowhere,
and certainly nowhere near the kingdom of Christ,
the kingdom of God. ( Eph. 5:5 ) 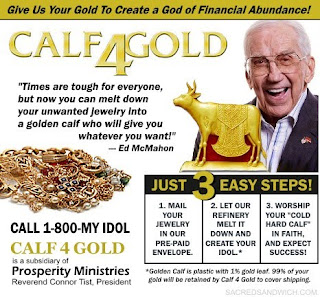 In Exodus 32, Aaron and the people created the golden calf because Moses hadn’t come down the mountain yet. They were lacking the leader who had acted as their tie to God and brought them out into the wilderness. They had a need that wasn’t being met, and that was the result.

We make idols to fill needs and desires. The fertility gods of the Old Testament didn’t truly offer fruitfulness (it certainly was a bi-product) , they gave people a chance to have sex. If you study some of the pagan practices mentioned in the Testament, you’ll discover that not only were sexual rituals common, but infant sacrifice followed! People wanted to “get down” and didn’t want the result, so since the former found resolve in “religion” lets take care of the latter in the same fashion.

I know that we’ve had our spiritual revelation, followed by several revolutions of the same sort but it doesn’t make it any different for us! When we seek God for money, friends, comfort or whatever, without taking any time to get to know Him first, our actions are no different than some guy who decides that he wants to “hit that” in reference to some girl that just walked past him at a bar.

Effectually then, we make God into an idol. Not that He becomes a powerless block of wood or stone collecting dust on our mantle at home, but rather, He has become a meaningless vending machine of goodness to idiots who don’t deserve it.

I know I’ve been one of those idiots. I’ve simply prayed for things with no “Hi” or “Goodbye”, not to mention any notion of gratitude. I’ll probably do it again because frankly, I sometimes suck at life, but that won’t keep me from thinking about God, and trying to enjoy Him as a friend above and beyond anything else.

Wait- What are we Doing?