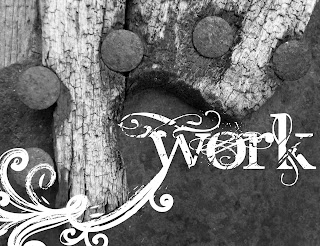 I graduated in December of 2008; I knew that I was going to go on to graduate school, and that I was going to do it online, thus making myself into a home-school student, which is mildly unfortunate, but I can still hold a conversation with my peers, so I think I’m OK. I didn’t know that to think or do about work, so I just chilled at Starbucks, grateful that I actually had a steady income and benefits. I was feeling restless, but wasn’t in a bad place, so figured I would just wait.

A couple of months went by this way, and near the end of February I got a text from my old boss at the church. He had gone off staff there and was working with another gentleman from my church in a small, but growing company. He offered me a job. He explained the whole thing to me over text. The job description he provided was man-slave–give him a break, who wants to text more than that? Either way, I got an offer, explanation and was pretty much hired via text message. It was rather interesting.

I was excited because first, I would be working in a company that focuses in communication, (my degree) works with Christian authors (another big deal for me) and I’d be making a lot more than I was serving coffee to grumpy people who didn’t typically deserve good customer service. Also, I was about to step into a predominantly Christian environment, which would be fun.

I focused on the money more than anything else. I was excited to not be broke for a change. I didn’t spend a lot of time considering the nature of the work I would have to do. Fortunately, I like the man that I was about to go work for, so I wasn’t necessarily concerned.

In Matthew 20, we have the parable of the workers in the vineyard. A man goes out and hires people to work in his vineyard. He goes out later and hires more people near the end of the day to do the same thing. At the end of the work day, when it’s time to pay them, everyone gets a denarius, regardless of how long they worked. Of course, this makes some of them contentious, and they throw a fit, but the man explains that he will pay whomever whatever he wants. What does this mean to us?

Well, it’s exciting for those people who experience deathbed conversions, but that point is excessively obvious and abused. I think that this, in the light of salvation indicates that the work is more important to God than the reward. Of course, He’s excited for us to die and go to heaven someday, but what the crap do we do until then? We bloody work! Our lives are so much more than a waiting period before heaven, they’re a time of work!

I didn’t get the job that I have so that someone could give me money. I know that some people hire their kids or people they like for that reason, but I’m not in that boat by a long shot. I was hired because there was work to be done; tasks and similar duties that I could accomplish. Pay just made me responsible to do it! Don’t do your job, forfeit your paycheck.

Thankfully, God isn’t quite like that with us. We’re saved by Jesus Christ’s work on the cross, not by our own actions. How often though, do we miss the point of our lives as Christians, and not do what God has told us to? How often do we bury our talents? We do have a responsibility to work for the Lord, to help expand His kingdom on Earth. When we drop dead from exhaustion, THEN we can look forward to heaven and all that wonderfulness!

Alas, we must wait. Our reward might not be in this lifetime, just as many of the patriarchs didn’t see their full recompense, even though God had made promises to them(Heb. 11). We need to get our butts in gear and understand what it is that He expects us to do, so we can do it.

PS- I might have made that boss sound like a jerk; it’s totally a sense of humor thing, with the text. I’ve since moved on in the company and I have to say that I really miss working for him– I’ve never had a boss buy me so much coffee or lunch, and I can genuinely tell you that there are few people that I like and respect as much as I do him! That should be its own post. . . like vs respect in your friends, because frankly, i don’t respect everyone I like, and the opposite is true too!

It’s OK to be Extreme