Focus on the Outside 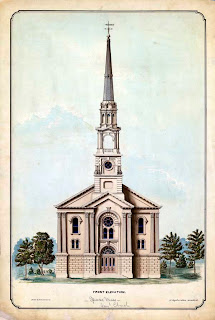 A few have metal roofs, concrete walls and if they had the money, they might have some stucco on the outside. Other churches hide in strip malls, like mini shopping centers. They share walls with other businesses, and probably compete for parking as well. . .

I studied architecture for several years, and I adhere to the philosophy that form should indicate function. I think a church should look like a church. Give me a steeple. I want bells, and I need stained glass.

Maybe I’m just a sucker for the big cathedrals of the East Coast or that I saw in Amsterdam. . .

Obviously, cost was the dominating factor in how many buildings are built. Size and function take precedent over ornament and style. It makes sense; church buildings are constructed to hold a lot of people; they function as the center of a lot of action and looking good is probably tertiary at best. I’ve often wondered though, if a church building ever denoted reverence and love for God. Think about the temple that Solomon built and how it looked. Even the tabernacle was relatively decorative and it was only a tent! I think perhaps God’s a little flashy when it comes to things like that! Does God like his belongings to look good for any reason in particular?

I’ve always believed that the internal isn’t necessarily a accurate expression of the internal; that is, you can’t judge a book by its cover. That said though, I’m not convinced that the outside isn’t a reflection of an internal state; perhaps it’s accuracy might leave something to be desired, but maybe there’s some of truth to be noted.

We paint self portraits using brand names, pop-culture genres and anything else we believe accurately portrays us–our appearances are merely illustrations of the stories happening inside! This isn’t anything new, John the Baptist was obviously a hippie, and he dressed like one, too; camel hair and a leather belt? I bet he ran around wearing Petruli, too. He was counter-cultural, and made sure that you could tell from a mile away. Did John the Baptist dress like that because he didn’t want to invest into his appearance? Or was it that he wanted to stand out from other religious figures of the day? I bet each is equally true. I would imagine that it was all intentional- he looked like he did to send a message.

Our appearances speak to people. One of the first things taught in any good counseling course is to look at an individual’s appearance; if they look like crap, they’re likely living like it. That is, a person takes less care of their outward appearance when their internal state is unstable. Whether it’s intentional or not, we communicate to each other through our looks!

So, If God’s flashy, and if we look better when our mental state is in a good place, can we judge a book by its cover? Can we expect people to dress up for church because it shows some level of reverence for God? Do our appearances accurately portray the state and purposes of our hearts, [by the way, I would love to include actions in this as well, but I’m notorious for long posts and would rather not write five pages at the moment] or can we say that all exterior appearances are vain and meaningless?

Unfortunately, assembling a facade to cover hurts and other ugliness comes with greater ease than actual change, and perhaps that’s where the American church has been. If a man shows up on Sunday in his awesome tailored suit and shiny shoes, perhaps nobody else will know that He’s an alcoholic and a compulsive liar. Excessive cases such as this have made people cynical toward those who invest into their appearance. It’s a hapless truth that we probably can’t trust a person’s looks.

I’d say that we have a temple to take care of. It might not be the most important possession we have, but regardless, it has been given to us to control; that might mean product in the hair, it might mean wearing our best at particular times as well as avoiding McDonalds and trying to keep the waistline in check. You can call me critical and shallow, but I think I can tell what people care about when I look at them, especially in certain contexts. Just as a wife dresses herself up for her husband, I’ll dress myself up as part of the bride of Christ for my God, hoping to give Him not only my heart, but everything attached to it, as well.