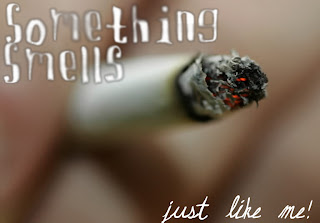 I got a smoking ticket when I was thirteen. It’s a citation for underage tobacco consumption, that I only got because the cop thought that my friends and I were smoking weed, otherwise, he claimed he wouldn’t have bothered us with something like that. I say whatever, he just wanted to torment young people who had unfortunate addictions. Either way, it didn’t curb the addiction, I smoked until I was twenty years old.

God delivered me from smoking at the first summer camp I went to. It wasn’t dramatic or anything similar to one of those awesome testimonies where the heavens part and Jesus smiles down on someone, but rather, it was a quiet experience that left me with the confidence that I’d never take another puff off one of those nasty little guys ever again. I have to admit though, I still have cravings. I still miss the burn in the back of my throat when I’d take a drag off of a Marlboro. These cravings get worse when I’m around cigarettes.

My parents still smoke. It drives me crazy, because I typically want one when I’m over there. I had to move out when I was trying to quit, because it was so hard being around it all the time. The challenging part now is when I leave, I smell like smoke. A residue of tobacco product crawls into my clothes, clings to my skin, and hides in my hair. I absolutely hate it, because that smell then goes wherever I go. It makes me want to scratch at my skin, and puts me in the mood to yell at people. Typically, I have to at least change clothing, perhaps even shower if I can after leaving the parents’ house, all for sanity’s sake.

Personalities are like smoke; they stick to other people. Our favorite words and phrases become part of our friends’ vocabulary, their shortcomings become our challenges, and we even can share strengths. We tend to underestimate the level of influence we actually have on each other, not knowing that sometimes the words we say stick to other people, make them feel bad, or even create a stumbling block that sends a loved one sprawling over, perhaps on their face.

Some people have a personality like poison oak; they’re not necessarily noticeable until you happen upon them on accident. After contact, your immediate desire is to pull away and scratch your awkward wound. Other people are like honey; sweet in any circumstance, but you feel sticky, perhaps even a little dirty after being around them because hair and lint stick to your fingers and the corners of your mouth. I don’t want to wound others, I don’t want them to feel dirty after encountering me.