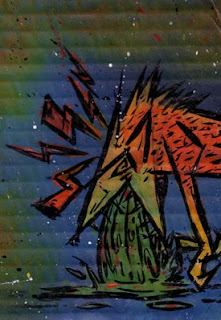 It’s bad enough when you hear the hack, cough and sputter, but then the splash happens.
I hate the splash.

I would like to think that I have an iron stomach, but if you asked me to clean up dog vomit (or people puke), you would immediately disagree with that statement. My own gag reflex goes into overdrive as my senses tell me that I’m drawing near to something that’s as wretched and foul as anything I could ever imagine, probably worse. It’s natural for the body to want to pull away from something that’s not healthy for it. That’s one reason why God gave us a gag reflex.

It gets worse though. Too many times, I didn’t get there fast enough, and my incredible beast of a springer spaniel would be lapping up her own abdominal voorheaves. Gross. That dog ate out of my hand. That dog licked my face, and now, she’s eating her own half-digested kibbles and bits, and I’m about to lose mine!

I think God can use me because of this example. Too many people worry about being excessively harsh, strange or something like that when they communicate about Jesus. Too often, we don’t think that we’re good enough to be ourselves and represent Christ, and frankly, we’re right. That said, what can we do about some of the examples God gives us? He didn’t choose the beautiful, graceful and the pleasant, he talks about vomit, has prophets cook over feces, and even had one marry a whore. Now back to vomit. . .

Obviously, God was referring to people returning to sin. The dog probably doesn’t know any better that what it’s doing is wretched and that nobody will love it for a solid three hours after such a display. But what about people? How often do we return to our own sin, in spite of how it makes us look, and even though it’s perfectly disgusting? Just like that ridiculous dog, we run back thinking that it’s something we need, but as I claimed earlier, a gag reflex is a defense mechanism meant to protect the body!

I wish I gagged before I lied. I wish I got queasy, pale and weak in the knees at the mention of anything contrary to God’s will. Frankly, I desire sin to be more arduous and foul than effortless and attractive, but it isn’t quite like that. Either way, as we grow and develop in Christ, we need to learn to say no to our own attractively disguised sin. Especially the sin that we hold onto for dear life, that we run back to just like dogs because it looks like another meal.