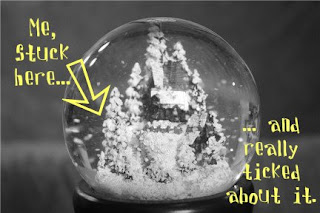 There’s a disparity between that which we hold as ideal and reality. So many things in life can’t be fully appreciated because something stupid is attached to it which eliminates any value it has on its own. Take snow for example, which happens to be falling outside as we speak.

It’s beautiful, it’s white, and it’s a silent killer. From where I’m at, I’m watching huge, shiny chunks of the crap come crashing down from the sky, and it’s beginning to pile up. Part of me is sitting here watching the landscape disappear, thinking “Well, isn’t that nice?” while my more sensible half is screaming, “NO! Send it back to hell!” I have a contradiction in me that doesn’t make a lot of sense.

I used to snowboard, and I love sledding, have enjoyed snowmen, snowball fights, and snow angels. I have had my fun in the snow, but then again, I also got into my first car wreck in the snow, too. I remember being out on my uncle’s ranch, feeding the cows and spinning cookies in the field until somebody yelled at us for being dumb, or until the truck accidentally got too close to a cow. Snow is fun. It’s white, and fun to eat, that is, unless it’s around people. On the road, it becomes brown-gray, and gets piled up in parking lots, when it’s plowed out of the way. If it sits on the road, it becomes a slush that the car in front of me will inevitably splatter all over my windshield.

I slipped and fell in my driveway the other day when it snowed. This is rare. I always slip, but rarely does my butt touch the ground when it happens. I wanted to say bad words, but somehow managed to not do that. How much are other things like snow? Good, but screwed up somehow….

Beer. It’s good, but people don’t have enough self-control, so it feels like the whole church looks down on having one of these, or a glass of wine on occasion. Sex, not as negative, because it’s something that can be contained in marriage and be OK, but if it’s outside of that context, then we’re all screwed, because it makes a mess of things. I think that luxury could be another one of those things, too. It’s OK to have nice things, but some of us, (I’ve done this) get carried away in having the most recent trend, or the best whatever. These are good things, but have negative connotations (sometimes) because of either abuse (due to their innate goodness when mixed with the adamic nature) or because of something bad affiliated with them. Beer wouldn’t be a problem if it didn’t get people drunk ( Hooray for O’Doul’s…not really), sex woudn’t be bad if teenagers and those unmarried people in their mid-twenties could just leave it alone. (I guess all unmarried people). Church might be on this list for some people, because they don’t forgive, or because someone else tried to do something and messed it up. This list of things could go on for a while, because we have a tendency to jack everything up.

It’s this damage that creates the discrepancy between those lofty ideals and the reality that we find ourselves bound to, but what can we do about it? I could offer ideas for change, but none of them are perfect, so perhaps we should always just seek God, asking Him to explain how we can better enjoy something, or at least not sin in the process. Obviously, His word tells us a lot about this, so perhaps we should begin there.

I like to joke about beer, because it messes with people who have placed it on their “evil” list of untouchables, which is probably bad, because it makes me look like a heathen, but I think that it’s healthy for them. Their freaking out though, just proves my point, that there truly is something that keeps us from fully appreciating something we enjoy.

Snow, if you weren’t so cold and slippery, I might enjoy you more. As you are though, you have made a mess of my car, which I’m afraid I’m going to wreck from now through April. Good job.

Study and Girls go Together Well