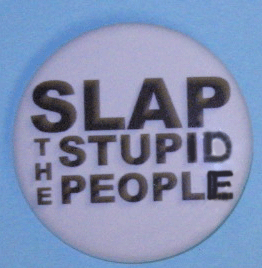 My apologies for not writing ANYTHING for last few weeks, I’ve been busy writing the equivalence of a small book. I’ve had papers due in four of my six classes, which is RIDICULOUS, but more than that, in one of the other classes, I had a thirty page portfolio due. So, I’ve been busy. Aside from that, I’ve really had nothing worth sharing, my brain has been borderline… not working. That is until today, which funny enough, road rage inspired me. Here goes.

I got a mass text from a girl the other day that I had to laugh at. I don’t like texts that have been sent to seventy other people because I think that it shows no thought at all, and I really just don’t want to respond. Anyways, the content of this text was,

Christian Fight Club: first rule about CFC, don’t talk about Christian Fight Club.
Being the analytic person that I am, I first thought that this idea was entirely asinine, because Christians fight like girls, (more like scared little kids, girl fights are actually scary) but second, I decided that this person should’t be sending any text like that out because she’s a little sensitive.OK, maybe a lot sensitive. . . I’ve made her cry, probably a couple of times. (Laughing) My response was,
Why would someone like you send that? You’re a wimp!
This began a conversation, during which she told me that I am rude and that hurt people hurt people. I think that she was implying that I’m hurting, but I don’t fully know. Anyways, I decided that if we’re going to be honest with ourselves about this, I think that smart people hurt people, and taking that a step further, if we all were a little more willing to make each other cry, the world might be a better place. The smart people know this and are therefore a little rude sometimes.

Just imagine that instead of shrugging it off when people are idiots, we tell them just how stupid they are. If it’s really bad, then we could slap them, too. Jesus didn’t pull any punches when it came to telling people that their lives weren’t in order, and our goal is to become more like Jesus isn’t it? He demonstrated our responsibility to tell those around us when they’re dumb and should turn, before they do something like catch chlamydia and give it to three other people.

Think of the change that all of us would experience! Consider the growth of the human race! We could get past fighting over things like abortion and gay marriage, or perhaps we really could physically fight about them, which might be bad. I guess that tact would have to come in to play at some point and people would have to really listen when someone is telling them why they suck at life, and maybe we would have to sift through a bunch of misguided attacks, but still, there’s still something to this being entirely honest with each other about the faults we see in those around us.

The only bad thing about this is that people aren’t good at taking criticism. None of us like to be wrong, so if this didn’t propel us in the direction of world peace, it might incite riots and wars and expedite the fall of humanity, so I guess it could be bad, too.

Either way, I think we should give it a try, just to see what happens. Next time you’re in traffic, and someone does something ridiculous, if you get the chance, pull up next to them, roll down your window like they did in those bizarre Grey Poupon commercials and say,

Tomorrow, when someone says something so incredibly vapid that it causes your jaw to hit the floor (it’ll happen), let them know that their words might just make everyone around them stupider, and that they should keep them to themselves. You don’t HAVE to be rude about it, although I sometimes prefer it. Eventually, your friends will thank you if you live like this, I promise. The ones that don’t stick around? They don’t deserve a friend like you anyway.