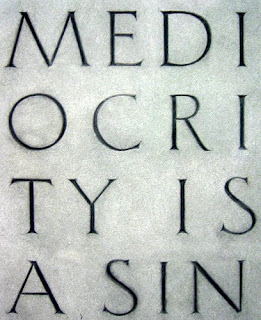 I was driving down the freeway not incredibly long ago, listening to what I think could have been Delirious? (Why the question mark you strange European band?) and like I usually do, I was singing my heart out to Jesus. It was worship music, I worship Jesus, so why not? I wasn’t necessarily in the Holy of Holies, so it wasn’t too much of a shock when I heard a car horn blasting over and over. To my mild discomfort, a truck with a couple of guys who might literally be related to Joe Dirt had made their way up next to me and heard my incredibly vocal performance, and were laughing feverishly at the display they had happened upon. Interestingly enough, I just laughed with them, before I mashed down in the accelerator and got away from my new friends. I wasn’t embarrassed, because unlike some, I actually understand that I can’t sing.

I can think of another time not incredibly different than this. I was at a conference with my church, and this girl, one of our interns was standing in front of me singing her heart out. It happened to be one of those ministry times where someone’s on the piano, and the preacher is running around yelling prayers over people who have responded to an altar call, and the rest of us kind of just hang out, talk to God, worship, do those things you do when you’re there in the moment. But this girl sang really loudly, and it was awful. To the point that I opened my eyes, and made the mistake of making eye contact with a friend. We both erupted with laughter, which in spite of our efforts to control it, gushed out to our other friends who had noticed the same thing. It got to the point that probably six or seven of us had caught on and avoided even glancing at each other because we knew we’d hurt her feelings if the laughter progressed.

I was thinking about this the other day, and we all know that we’re told that the best way to worship God is with our life. We don’t ALWAYS sing songs, and we don’t ALWAYS have the colored lights, soft background music, and people swaying back and forth around us, but we worship Him with what we do with ourselves. You see a lot of talk about this in those incredible books, “Blue Like Jazz”, “Traveling Mercies” and I believe in “The Raggamuffin Gospel” as well. These books all focus on people living out their lives fairly clumsily, but trying to please God the entire time. These are the people who can’t sing, they are just as we are is what we gather when we read one of these.

This ability to relate probably is what has made these three titles (especially- there are many like them) so successful. We have empathy for the worn down person who finds their solace in Jesus, in spite of their mistakes. It’s this rapport that I worry about sometimes. I think that there are a lot of people who seem to be content with their flaws, because they’ve been forgiven. They make us human, and we’re not perfect, right? Sure, but what happened to improving ourselves? What happened to asking God to remove the darkness from us that has managed to stick around since His glorious entrance into our lives? Is it because we want to relate to the imperfect, the others who might not know Jesus yet that we tolerate, even make excuses for our sin? I think maybe, just a little.

We can’t live with mediocrity like this, because compromising might make for a book that makes it to the best-seller list, but all that’s done for us so far is make us feel better about our own flaws, and our own misgivings and we never change because of it. We are called to “be perfect, just as your Father in heaven is perfectt” (Matt 5:48) Which, I think is intimidating, and people won’t talk to us as easily, and nobody wants to buy a book about how perfect you are, but in the end, it’s something that we all need to work toward.