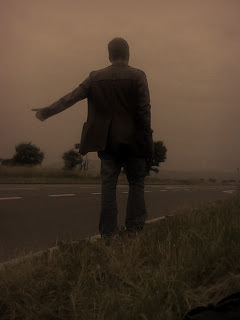 The sky was dripping now more than anything else, the remnant of what had been a deluge of a thunder storm still clung to the sky and clouds, but it was mostly veered off in another direction by now. Headlights reflected off puddles into still, green trees along Hill road. The occasional miserable cat, roughed up by the downpour gingerly tip-toed across the street until it saw me coming, then it ran.

Funny enough, I was driving to Meridian to find someone. A young man who had been hitchhiking from Indiana to Washington. I was trying to figure out where he could stay tonight, especially if the bad weather came again. Nobody wants to sleep outside when the sky is trying to beat you senseless with cold, wet slaps in the form of huge gusts of wind and rain. This time of night though, who could I get on the phone to help?

It was while I turned this over in my head that I realized something incredible: everything I have, I’ve been given. It’s amazing and humbling to finally get that you haven’t accumulated your “wealth” on your own. I have a nice Mac computer, bought with money given to me for that purpose, I have an awesome flat screen television, a gift (Funny enough, it hasn’t been used at all lately… someday I’ll watch you again TV) my car, my bed, dresser, half of my wardrobe! I’m not exaggerating, either. People give me amazing gifts.

I feel like a parasite sometimes, I really do. I just feed off God and what feels like others, who give, give, give, and honestly, I don’t often ask, either, that’s why this whole thing is so funny, strange . . . random. I occasionally stop and give the person with the cardboard sign whatever cash I have with me, but I need to step this up. “To whom much has been given, much is required” (Luke 12:48), which can be taken in a few ways, but even literally, God has given me so much!

On my way home, I was behind this dirty little green car that wouldn’t do the speed limit. Opaque water sprayed off the tires in front of me blurred my windshield between wiper blade swipes. A little blue bumper sticker caught my attention, and I got as close as I could to read it and found the perfect conclusion to my thoughts of tonight.

“Don’t let this car fool you, my real treasure is in Heaven.”
I smiled and thanked God one more time.

I wish I had found the hitchhiker last night, because I was hungry and we could have gotten dinner! Instead I came home to Fritos and Mac, and did homework for another several hours. Anticlimactic, I know.

Why We Need Pants: A Proverb