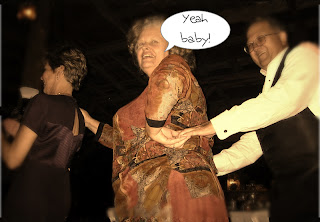 I kind of wonder if David ever felt like an idiot when he was worshiping God and clothes were flying off. Michal certainly wasn’t incredibly approving, but does that matter?

My older sister got married on Saturday to the guy she’s been dating for eight or nine years now. I can’t remember how long, I still think they should have gotten married years ago. I could have nieces and nephews by now, at least puppies! Anyways, I got to see a lot of family that I haven’t in a long time, and more than not, the night was a lot of fun. The most memorable point in the night was when Harry Nilsson came on over the loudspeaker…

Brother bought a coconut, he bought it for a dime
His sister had another one, she paid it for the lime
In unison, my aunts, uncle, cousins, parents and I all rose and made our way to the dance floor, hooting and hollering every step of the way. None of us knows how to dance, but we do it anyways, at least around each other. Typically, alcohol is involved. That was their excuse, I’m not sure what mine was.
I say, Doctor, doctor, ain’t there nothin’ I can take,
I say, Doctor, dooooctor, to relieve this belly ache?’
It’s tradition to circle around in one big line and do some sort of redneck shuffle, as my uncle Bruce calls it. One person jumps in the middle and does something so ridiculous that we all laugh, whistle, clap, and sometimes yell somewhat inapropriate things.
Put the lime in the coconut, drink them both together,
Put the lime in the coconut, then you feel better,
The song feels so long because you feel so inane the entire time, but everyone’s having so much fun that you can’t stop! Suit and tuxedo jackets fly off in different directions, random nuisances disappear altogether, so we can all dance a little more freely. We’re all singing together at this point. If you’re imagining this, then please, picture my new brother-in-law’s parents with their jaws about to hit the floor, his grandma staring at the floor not knowing what to do, and his uncle shooting looks at the rest of them, silently mouthing,
“Oh my God.”
Poor wretches never learned how to have any fun. Fortunately, my family did. That’s one reason why they’re so amazing.

Talking to God: Dark Night of the Soul