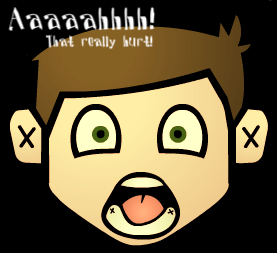 “Those pearly gates, you know, the ones in heaven? They’re not just pearly, they’re actual pearls. Big giant ones. We enter into heaven through them, you know this, don’t you? What does that mean to you, that you enter into paradise through something that was created from….”

I think that most Christians who have been in church for at least a year have heard about pearls, either from their pastor during a sermon, or from a well-meaning leader in their church who wants to help them through something. C’mon, it’s those tough times, those irritations that provide resources for something beautiful to develop, whether it’s character or something else. When it’s all over, you’ve got this shining example of patience, love, peace, faith, something like that… I can’t help but contrast this with another hackneyed illustration, the burner on the stove.

“What do you do, but reach out to touch something that you were told not to. You’re just a kid, and you don’t understand that your parents know what their talking about when they say that it’ll hurt. But you did it anyways.”

The first tells us that we should stick to our guns and through our staying power, something beautiful will emerge as our reward. I couldn’t agree more. I think that good Christian character is the result of dealing with all the garbage that we don’t want to. On the other hand, can one argue against such a natural inclination as to withdraw when something hurts? Of course, we use this illustration as directive in listening to authority and avoiding sin, but what happens when we free it from that context? What happens when all of a sudden we’re pulling away from a relationship where we’ve been hurt? What about any number of circumstances that seem incredibly ghetto, but we stick through to what we hope to be an eventual end? Maybe we weren’t supposed to.

Nobody wants to leave their hand on a burner where the result is rapidly progressing from the first degree to the third. The pain not only doesn’t go away, but the inflicted wound worsens by the second. We need balance in our metaphors for life, because some cause us too much harm, while perhaps others become meaningless in different contexts.

In The Problem of Pain, C.S. Lewis said, “God whispers to us in our pleasures, speaks in our conscience, but shouts in our pains: it is His megaphone to rouse a deaf world.” I wonder sometimes if certain areas of life seem incredibly hard and unfulfilling because God doesn’t want us there, doing particular things, or even just hanging around. It would make sense, to make something brutish and completely wretched to get someone to move, wouldn’t it? What might this look like?

I think that we could all piece it together, but I truly do believe that sometimes there is a time go or, as well as there is a time to stay. I mean this literally and figuratively, because sometimes you rally need to get your hand out of a business deal, out of a relationship, a job, a place you live! The Holy Spirit should act as our Guide and let us know what we should be doing, not only our emotions and other sensations. Those are incredibly real, but can be falsified really easily. Emotions should tell us what we’re focusing on, as well as how we’re looking at it, but that is perspective, which isn’t necessarily truth.

Going back to the incredibly Mr. Lewis though, I am wondering how often we attribute our pain to the devil, or blame ourselves for being ridiculous when really, we should be doing something to change it! I had this conversation with a buddy recently who’s been going through stuff and has literally been told that he should wait it out AND that he should just bail on the situation. Obviously he was having a hard time with the contradicting advice, so together, we decided that he should listen to God!

Talking to God: Dark Night of the Soul