One of the best traditions ever established by any Christian community is the after church lunch. Crawling out of bed to attend at least one service, and perhaps serve in some area such as kids’ church as well needs some kind of reward outside of personal growth and relationship with God. Especially if we’re suffering through cold sanctuaries, strangers who sit incredibly too close, and the occasional strange smell. I love church, a lot, but sometimes, I need something like eating out with friends and other beloved people after I leave those fingerprinted front glass doors into the big, bright, world again.

My lunch today found me at Panda Express surrounded by several people I didn’t know, which isn’t necessarily bad. I can talk to strangers without getting too creeped out, especially if they’re close to my age, which happened to be the case today. My legs dangled from the really high chair I sat in, while stuffing my face with orange chicken with zeal and excitement. I love food. Josh, who happened to be sitting to my right was talking about the church that he attends, his involvement, and all that lovely stuff that we all share with other Christians that we’re just meeting, when he said something we’ve all heard, and more than likely have said before…

” No church is perfect. If I ever find a perfect church, I’m not going to go to it, because I’ll screw it up!”
The rest of lunch was fun and involved mild yelling from one table to another, and lots of laughing, but when my contemporary made that statement, I stopped listening for a few minutes as I made a decision.
If I ever find the perfect church, I will go there.
Understand that I’m fully aware of the fact that this will never ever happen, until I’m dead, rotten and resurrected again, but given the opportunity, I’d go in a heartbeat. Forget this, “I’d screw it up” baloney because even if I did, I couldn’t do THAT much damage, could I? I’m being incredibly…I don’t think that theoretical or philosophical are the right words, but think along those lines there… I love my church, and I wouldn’t leave it, so please, get over it for now. That said, we all do make mistakes, and that does make for an imperfect church. My membership at my place of worship pushes it one step further from that elusive state of being “consummate.” My presence there makes it worse, and I genuinely wonder then, what my employment there meant sometimes! (I’m kidding)

I guess I’d go to “perfect church” because I’m critical. I have a co-worker who loves me because I notice the flaws in everything more than she does. At times, I’m probably comparable to that Simon character from American Idol. ( I hate that I just made that analogy…) We both believe it to be a curse, and would rather not talk about it most of the time. I’m considering starting a support group for the few of us out there, so that we don’t all go crazy. The scary thing though, is that if you got us all in one room, and one of us got started on just one little fault (in anything, not exclusively the church) we might become an angry mob. And as much as I have always wanted to lead one of those around town, I’m not in the mood for that much these days, so perhaps we’ll just skip the support group altogether. 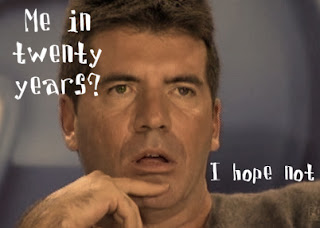 I pray for wisdom in my criticality, because I know that I can’t run at the mouth, because I’d be speaking a lot of death. I know that I can’t get frustrated because nothing is perfect, including myself, so why be so observant of EVERYTHING? I don’t know. It’s one of those faults that I just openly warn people about so they’re not terrified when it rears its ugly head.

Anyways, the “perfect church” might give me some peace of mind. That’d be nice.