The based on the lovely “whooshes” followed by some loud “whacks” that were coming from my general vicinity, one might be led to the conclusion that I’m good at golf. Oh yeah, I guess lets not forget the grumbles that followed the latter of those two noises. Unfortunately, I’m not good at this particular game.

Add to this the squealing of John’s trolley for his bag and clubs, and you’ve got my last Sunday. I like to go golfing, but if anyone knows me, they understand two things about me and sports: The first being that I’m blind, so that probably impacts my ability to do a lot, and second, that I’m the least coordinated person around. It’s both funny and frustrating. I find it humorous because sometimes even I laugh at myself as I try to throw something, trip over my own feet and almost face-plant. I get mad because about half of the time, I actually care and wanted to throw the stupid ball to a specific person in a particular place.

That said, the few times that I actually got a good hit in, I didn’t see where my ball went because I wasn’t rocking the glasses. Jon made mention of this at the first hole and dedicated himself to being my eyes, which wasn’t incredibly difficult because of the fact that my ball RARELY got incredibly far in one hit (At least that’s how it felt….I did a little better than I’m implying… I think).

What made this outing something a little different was that on our third hole, my grandmother called me. I didn’t answer, because that’s just a little rude, but I called her back as soon as we were finished that day and I was sufficiently annoyed enough to want to beat the life out of someone with my driver… The conversation went a little like this…

“Jacob, what’s your day off this week?”

LONG PAUSE then the conversation closing details, then good-bye. It lasted less than two minutes.

Anyways, I got a 2008 Hyundai Accent, and it’s beautiful. And God bless my grandma, who 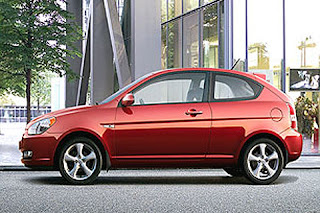 taught me how to drink and cuss, and who still loves me now that I have retired from both practices. I’m grateful! Bless God too, because I’ve been praying for a new car! YAY! So in spite of my poor performance on the course, I left in a good mood that day!

Well, Here We Are