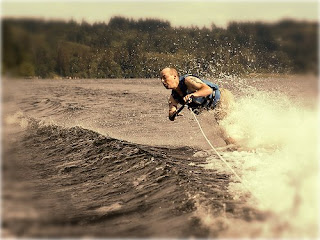 From across the table we were all sitting at, Kaylee sent me a text, “By the way, nice hair.” We both laughed, especially when I texted her back, “I brought sexy back today.” I was at my work to pick my check up, and had to hang out and wait for the safe to be opened, and the girls had waited for me. They had to wait kind of a long time, seeing as how I had quite a drive from the lake to my car, then to work. I had just gotten back from wakeboarding and was frumpy and sunburned.

We left Lucky Peak Reservoir as soon as my buddy Kenrick finally accomplished some sort of a back flip on a wakeboard, behind a boat that wasn’t designed for such lofty tricks. It was impressive, and it only took four attempts to land it. Before that, the rest of us had jumped a little here and there, and wrecked a lot. I did especially bad for some reason. I’m no professional by any stretch of the imagination when it comes to jumping and doing tricks behind a boat, but today, I certainly looked like a novice, especially on my last face plant. After my face hit the water, I was convinced that I had lost an eye, and that it would be floating around in the water somewhere. Such wasn’t the case, bless God.

We left for the lake a little latethat morning because of me; I had gotten off work at ten after getting there a little before six. Being there that early means I was up nasty early too, so I was tired. I had to drive home and I don’t live close to the church, which happened to be our meeting place, and I needed to put on the board shorts and take care of a few random things. I raced both directions with fists in the air, yelling all sorts of Christian type swears. It was a glorious display on my part.

I probably looked like a drunk driver on the way to work, it was so early! I had been opening or close to it all week and was incredibly tired. Today was my last day doing so, and I was off early. I didn’t bother going to bed early the night before because I figured that I would just take a long nap and still have plenty of my day left after I left work. My plans to float the river with some co-workers and school people had fallen through because most of the guys dropped out, and I wasn’t interested in floating with a bunch of girls today. That said, I wasn’t interested in just sitting at home, all alone all morning. I pray a lot when I drive, and so during this little commute to the coffee place, I asked God, “Can I have some fun today? Please?”