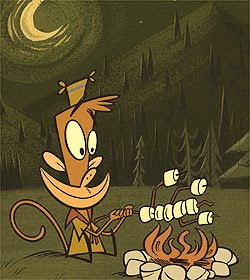 Squished into an exceedingly, abundantly, stifling hot sleeping bag, surrounded by frosty air, I slept. Sounds of giggling and snoring accompanied the creaking of my bed as I tossed and turned. Not much later, in spite of the fact that the sun hadn’t yet revealed itself, my alarm sounded, I rolled my eyes in protest. This was camp.

Night is always the hardest on me at camp. I can’t tell if I do well without sleep or not. I think I do because I frequently go without it, but I think that I don’t because I tend to be a contentious expletive whenever I don’t get very much. That was me all this semester…but this is summer, bless God. I took naps in my free time.

Overall I can’t complain about camp, we had a lot of people up there, and I God did a lot in many of us, so it was good. I’d have to admit that my biggest challenge was how little I did. being on the youth staff and all, I typically have a lot of responsibilities when it comes to any of our events, but since I have had such a busy schedule with work and school the past several months, I don’t make it to a lot of the meetings and therefore, didn’t get as much to do. Either way, I had two great cabins, and lots of amazing kids, and it seems that God really used me to help a few of them, so my presence was not a waste up up there! Here are a few of the highlights…

1-Snow- For about two days, I thought we were at our winter retreat because it was coming down in huge, fluffy white chunks! I prayed to Jesus to send it back to hell, and eventually the sun came out again.

2-Counselor games- Every year our camp features games on giant tarps covered with water, soap, baby oil, oatmeal and other mush. This year was no exception. One of the games entitled, “Golden Corral” included kids racing from their ends of the tarp into the center to try to get something like a watermelon or flour, or noodles to bring back to their team’s buckets. It’s always messy and always funny, and we generally include a counselor round as well. This year, the guys and girls separately wrestled for watermelons. With the guys, it was just rough, a lot of tackling and all that but the girls turned it into a not-quite-as-bad “Christian Girls Gone Wild” in that they wrestled in nasty oatmeal and the like for fifteen minutes, and got to the point of throwing in a few kicks and punches, not to mention some shirt-tearing. It was brutally hilarious! Probably more-so because as soon as they were off the tarp and finished with the game, they were all friends again.

3-Uneven sunburn. Ever notice that whenever we get a sunburn, it’s typically consistent? At least symmetrical? Not mine this year. In a game that involved popping balloons stashed in a stocking worn over our heads, a girl whom I had grievously injured by popping her balloon accosted me and in trying to grab me, scratched my face and ripped my shirt on the left-hand side. I looked like I was wearing a lopsided boat-neck shirt and was scandalously showing some skin.

4-Team Cheers. My team should have won this, we wrote a Christianese version of Snoop Dog’s wretched song, “Gin and Juice” -C’mon!!!!!! Oh yeah, very few people there were old enough to know the song, and what? They all grew up in the church? Dang it.