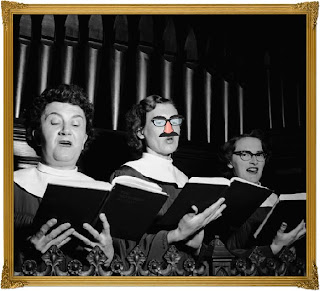 Every church has one. You can’t not notice them, even though you try with all your might. They bring banners, tambourines, bells and whistles to service and make a glorious ruckus. In spite of best intentions to glorify God, they mostly manage to distract everyone else around them. The conservative eyes roll while the teens and their younger siblings point and giggle. I’m talking about THAT person. Yes, I’m talking about the individual(s) who like to truly worship God by bringing their own instruments, objects to wave in the air, and occasionally dance.

I mention this individual because of an experience I recently had at a Sunday service. There I was, singing, probably off key, but quiet enough that nobody else would be able to tell, enjoying my time rocking out to Jesus when I looked up and saw her. Now, I must admit that this particular escapade is a little different, because somehow this one managed to get into the choir where everyone could see her dance, so she wasn’t out in the crowd like usual. Anyways, I look up and see a woman whose dance featured arms clasped at her sides, feet together and a most distinct rocking back and forth from the waist up. The look on her face was reminiscent of Christina Aguilera’s when she’s doing one of those roller coaster notes. The kind that starts low, goes really high, bounces around like a dropped ball for a second or two and ends with a wave of the index finger. Add to this my immaturity, and worship has officially been interrupted.
Of course I laughed, then I hit my neighbor in the shoulder to point her out to him. He thought that I was just raising my hand, so I had to hit him several times to get his attention. He laughed too, poked his wife in the shoulder, and it continued on from there. I can imagine that if any of the singers were to look at my row directly in front of them, they would see something similar to the wave, but instead of hands shooting up and promptly falling again, this wave included more pointing and giggling, followed by genuine attempts to get back into worship.

Nine out of ten times, when I have experienced this type of distraction, the only way to get back into worship is to close my eyes and imagine Jesus standing there two feet in front of me. I close my eyes really tight, and sing louder because the pressure’s on. The Big Guy is right in front of me! More than likely, this is to the disdain of those around me because as I mentioned earlier, I was probably singing off key to begin with!

To justify my making fun of other peoples’ worshiping, I will say this: I imagine that God allows these amazing opportunities for laughter out of His generosity and love for us. He sees all of our ridiculous faces while we worship and perhaps I notice because HE “tapped” me on the shoulder and told me to look because He saw something funny. Just imagine the Almighty saying, “Hey! Look at her!” Not only that, but I know that their hearts are with God at this point. Who cares what we look like when we worship? I don’t. I just don’t express myself as freely as other people do!

I only hope that someday I can be that person for a weekend or two. Perhaps it’s time to bust out that little drum that I’ve had sitting on the shelf for a while. It’s got a neck strap, so why not?