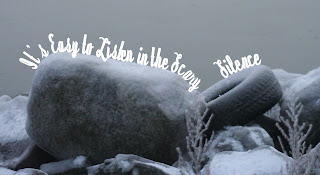 The parking spots close to my building were all filled, so I had to park around the corner. Normally, I didn’t mind walking but it had been snowing all day and I had to plod through it in the loafers I had wore to work.

I stopped in my tracks and listened. The crunch of snow beneath my uncoordinated gait had been the only noise. No crickets chirped, no frogs, no cats, children or even a car drove by at this moment. I found myself surrounded by silence. Winter nights are so cold and so quiet. I hate them.

I’ve never made any effort to hide my disdain for winter, snow, ice and cold. I always manage to slip and fall on some ice, I don’t have enough body fat to retain any heat and despise layers of clothing because I always end up feeling like the little brother in “A Christmas Story”.

Those reasons end up being relatively superficial because they don’t necessarily steal my joy (with the exception of the already mentioned fall). I really don’t like winter because it really is a season of death.

Animals bury themselves somewhere and hibernate, birds migrate, leaves get cold, turn brown and cut loose from trees leaving them exposed and deceased-looking. In Boise, inversion comes in and blocks the sun, stars and moon for weeks at a time. People mostly stay inside, and everything turns brown.

The worst part though, is the silence. Winter makes me long to hear crickets’ songs and katydids clacking. I want to hear couples walking together, talking to each other and cars with windows rolled down expressing the driver’s taste in music. Bring on the overpriced ice cream truck with it’s songs distorted by distance as they come and go up and down subdivision blocks.

They’re all distractions. They don’t prevent me from thinking, but provide fodder for thoughts other than the naturally occurring ones. The sounds of life are happier than some of the questions and desires that rumble around in my brain when it’s free to go where it wants.

In 1 Kings 19, God speaks to Elijah. He doesn’t do it in the wind, earthquake or the fire, but the silence that followed, so His still, small voice would be heard.

The next few weeks will be spent on spiritual disciplines, among other things. Obviously, I started with silence, but this is only the first for that awkward little discipline. Stay posted for more!

Of Small Events and Lingering Effects