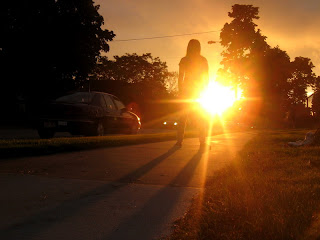 The slanty distinction from the light had legs like Jack Skellington and fingers like Nosferatu. The long, wiry figure had to stretch twelve feet across the pavement. That was more than double my five-something stature, but we shared the same stick-figure frame. My shadow followed me, a distorted mirror image in shape alone, always in view, that is, until I walked directly west toward the sun.

It was these moments that I lost sight of it. I couldn’t see the darkness created by my form as it blocked the light. I knew it was there, but the colors of the sunset were more important. The golds, oranges, reds and pinks meant more to me. The source of light had reached its apex of beauty, impermanent as this was.

Then the sun dipped beyond the horizon, and for a short, wonderful time, twilight remained. Light was everywhere, but came from nowhere. This put an end to my shadow, as everything was engorged in orange and red. To me, this held more beauty than the sunset, this was light at its finest.

We’re children of the light. We trudge on toward the light’s Source and in doing so, reveal a darkness. If we walk as we should, that will always be behind us. It’s the times that we face the wrong way that we can see it next to us, keeping pace. If we’re really out of whack, we might see that shadow before us, but what better reminder to turn all the way around than that disfigured shadow, a perversion of the reality of what we truly are?

As children of the light, we need to pursue the light, until we get to that point where we’re so submerged in it that no darkness can be found. That’s where we will live, and it’s where we’ll find the most joy.

Too bad they named a vampire book after that wonderful time of day, because that might have killed it for me.