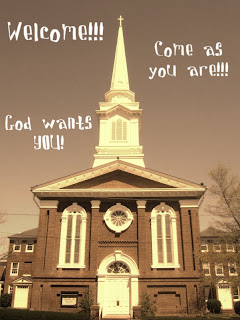 I was at work not too long ago talking with one of my regulars whose name I don’t know (there are several who get the “Hey. . . YOU!” greeting as they meander through my store up to the counter). During our brief conversation, I mentioned that I go to, “Capital, that church across the street with the big green roof” and their response shocked me a little. They asked,

“Isn’t that church a little seeker-friendly?”

That word combination is as offensive to most Christians as is “liberal” or “fundamentalist” because it causes us to conjure up images of a pastor on the stage, begging for more people and more money, just to make a congregation grow. I want to challenge that notion today and ask,

What’s wrong with being seeker friendly?
God called us to reach the world. He wants “All men to be saved and to come to a knowledge of the truth” (1 Tim 2:4) which to me implies that we should be focusing a large amount of our effort as Christians and as the church trying to get people into God’s Kingdom. The church should be able to do so without compromising sound doctrine and standards in the process, though.

There’s one mega-church on TBN that I am impressed with, because it is one of the largest in the United States, but I think that the Christianity preached there is watered down and is flat. Of the few messages I’ve heard, they’re excessively positive, (maybe that’s my problem) and never mention sin, death, hell, the devil, or any of the aspects to our world that bring people into bondage and prevent them from living a full life. I call this cotton-candy Christianity, because it’s all pink and fluffy. Mark Driscoll has managed to rip on the pastor of this church on more than one occasion.

This particular church is big, but I would probably go there as well if I wasn’t such a contentious stickler for the negative side of things. (If you can call it that, sin is an unfortunate reality that we have to deal with, so it should be preached on more than happiness if you ask me!) But perhaps that church is exemplery of what “seeker-friendly” shouldn’t be. Maybe the pastor wants to get so many people in a place where they can potentially know God so it’s OK to hold back on some of the scary elements, like hell and damnation.

There are many churches out there who bring people in through their events. They do something for all the holidays, the superbowl, (pray they don’t get sued) and even do service work in their area. I think that Angelus Temple in Los Angeles is a great example of this, and I also know that Matthew Barnett is an incredible preacher who is faithful to God’s word, but I would describe that church as being seeker-friendly simply by the amount of outreach they do!

Christians criticize the church more than we should. I will take responsibility for doing this, and will try to avoid doing it in the future, but I do think that critical introspection is important from time to time, so perhaps a little is OK to do. That said, if anyone ever tells you that your church is seeker-friendly, don’t take up offense right then and there, stop and consider what that means for your particular congregation.