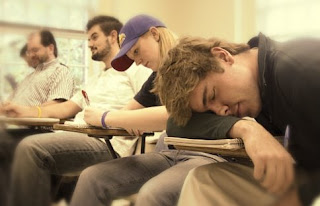 Words lost meaning at the passing of every second. Time had slowed, and apparently my brain followed, because in spite of the fact that I was reading, I couldn’t comprehend, and wasn’t remembering what happened three lines ago. The funny thing was that I was reading about determinism and free will, when suddenly my free will switched on, and the philosophy homework disappeared. Looks like the debate between those two ideas has been resolved.

This has happened every day for the past two weeks, and I think that it’s getting worse. Never in my life have I been a procrastinator, but suddenly, in my last semester, with 38 days remaining before I graduate, I don’t want do anything. It’s horrible. I must balance that statement with the fact that I have gotten most of my assignments done EARLY, but nevertheless, there have been the few last minute uh-oh’s that have come around. Funny thing, it has mostly been my philosophy homework.

Senioritis is described as apathy, laziness, and even contempt for all things involving school, or perhaps something that one is about to get out of. Fortunately, these symptoms are all acute, and end with graduation. Bless God, I’m almost done! I never even felt like this in high school, but then again, I was so drunk my last month that it didn’t really matter anyways, so time went by without any of the inhibitions that it has now! The only time before now that I felt like this was right before I went on staff at my church, when I was about to leave the pizza joint that I had been at for five and-a-half years, which was significantly long enough to make me apathetic!

I don’t even know if there’s any Biblical foundation for Senioritis, but here’s my attempt at theologizing it… God gives us grace. Grace is more than Him not killing us in a huge bloody massacre because we deserve it, but rather, it’s God’s enabling us to do something that He has called us to do. No calling, no grace, not an easy thing to live without, enter in frustration, and backing out of whatever endeavor we’ve put ourselves into. Well, I know that God has graced me to go get my degree, but I can feel that grace beginning to leave, my “gas light” is officially on, and I’m getting panicky like I might be driving in the middle of nowhere with no place to fill up.

That said, I genuinely believe that God takes that grace only to a point, because when it’s gone, a whole new motivation comes in to get oneself out of a place to get rid of that frustration, discomfort, etc. that might have happened upon us so quickly. This is negative reward, getting rid of anything that’s annoying, and God is smart enough to know that it works. He’s a genius. That said, even though I don’t want to, I’m still working my tail off, and it’s about to pay off. I graduate December 19, 2008 at 10am. Thank you Jesus.