What are we Doing Tonight? 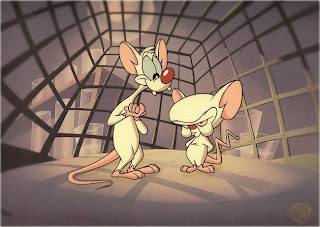 Two mice put the world in jeopardy on what seemed to be a nightly basis. Their schemes ranged from melting the polar ice caps to hypnotizing the nations using toys. These mice answered to the names Pinky and Brain, the latter of the two happened to be my hero as a child. I was bent on taking over the world because it seemed like the right thing for me to do. I was rebellious and arrogant enough to daydream about it, not that I ever thought that it would happen, but I knew that it would be fun if it did!

My love for cartoons hasn’t lessened any at all. Today I saw Pixar’s Wall.E. The movie was incredibly different for this company, and although it had much of the humor we’ve come to expect from Pixar, it also carried with it a serious note; at least it did in my mind. The most obvious agenda was to push this whole green thing that’s going on right now. This irritated me because I really can’t stand when people slip their agenda into childrens’ cartoons like bad anti-communist propaganda. Don’t try to brainwash my kids, I’ll do that on my own just fine thank you! (If I had children at this point)

The other point was more significant in my mind, and that was because it made me think about my senior thesis I wrote this last semester. In Wall.E, humans have become massive bags of fat and organs bent on being entertained. They float around in strange little chairs that do everything for them while they watch television on an ever-present screen that hovers in front of their faces. I don’t want to say much more because I’ll give the story away, but they were under control. The world had been taken over and it took less than an army, it didn’t take much at all aside from influencing the desires on a massive scale. If you want to take over the world, use comfort. If you make people feel good about themselves and everything around them, they’re yours. Just maintain what you’ve got.

I wondered if Andrew Stanton, the man who wrote Wall.E had ever read One-dimensional Man (Marcuse) or Brave New World (Huxley) and worked from their ideas of what a dystopia would look like. There were certainly some common themes between the three, in spite of the time gap between the last and even between each predecessor. I’m curious to know if the duration between these far-from-utopian works of fiction stands as implicative that we’re getting closer to such a world of if it’s just a fear, hiding just on hte other side of the horizon, in our minds.
People really are influenced like this, outside of novels, movies and cartoons. There’s more negative influence than we think, and the culprit isn’t big business, not the government, communists, socialists, or Hollywood. The Bible tells us that the devil is trying to control us as much as possible. Even if we’re saved, there is power to be exerted against us. This takes form in our entertainment, materialism, and all that, but these are just outward expressions of means to control us. The real tools are comfort and complacency. In the past, a revolution happened because people were tired of being subjected to poverty, abuse and lack when it wasn’t necessary. They way to fix this would be to overthrow the ruling regime and begin again. Can anyone say French Revolution? How about American Revolution? Reformation? The list goes on, but the biggest issue was that people weren’t happy with what they saw.

When you’re comfortable, you don’t look for the thorn in your side. The desire to make things better isn’t necessarily there because you might be at your best potential comfort level in your eyes. Even slight problems might be tolerable because the possibility of losing what you have is too great to gain that extra whatever there might be. People don’t like to make sacrifice.
The devil is betting on us being like that. We are called to be kings and priests, with a lot of power to keep him out of our lives, but if he can maintain us as individuals who don’t really accomplish much and live at a level lower than what we’ve been created for and called to, he’s getting somewhere. The devil wants you to be comfortable so you don’t pray, read your Bible, seek God with all your heart, and change and grow in the process. He’s not winning when that happens, but he isn’t getting his butt kicked around either, and he’s free to act in areas that we should have taken back for God but haven’t made it that far because we’re fat, lazy little Christians. Christianity is supposed to be aggressive, not passive.

The means to avoiding this trap is the fear of the Lord. When I started working at the coffee shop, I always tried harder and worked frantically because I was afraid of not doing a good job. I got a perfect score on my review yesterday, so obviously my confidence has grown a lot since my first month there. That said, I’d like to think that my work ethic hasn’t changed any at all, but I will say that I’m less afraid to stand around a bit and chat with customers or employees. If I fear God more, then I’m more likely to pray, read my Bible, live the life I’m created to, and find wisdom (Proverbs 1). This happens to include kicking the devil in the teeth and living a victorious life.