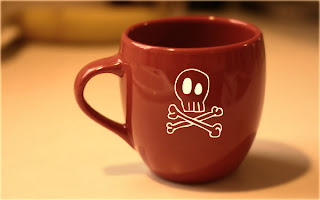 You know you’re something special if you make your coffee person glare at you. Scowling and other even remotely passive-aggressive behaviors are strictly forbidden where I come from. I know this because they literally drill it into your head in our fake-happy training we do semi-quarterly. Typically, if someone makes me angry enough, I just turn the dial on excitement from “caffeine buzz” to “overdosed on his antidepressants today” -look out customer if this happens. It’s so disgusting that even I want to vomit. The shame lasts for days after one of these encounters. Fortunately, they don’t happen very often.

The past two days though, I’ve had to give dirty looks and some attitude to people who just didn’t get it. It was rough. One lady had me make and remake her drink four times because that first try’s half-splenda was too much, then there was too much cream, and it kept on going. Not fun. So the last time I walked her coffee to our lovely little cave-hole of a drive through window, I didn’t bother talking, I just shot my arm out to make sure that she got the point. I’m fully aware of how childish this is, and I’m not incredibly concerned about this. I feel like these people need a swift kick in the rear, and probably some help in other areas of their life as well.

The other run-in began with the nicest, most unassuming person that I work with and a grumpy bald dude with a lot of tattoos. She’s new, she’s slow, she’s not going anywhere, so you might as well be nice! Anyways, I hate complaining about work, so here are a few tips for those of you who frequent any coffee shop…

1- Having a complicated drink order doesn’t make you special. I don’t care if it takes thirty-seven syllables to say your drink and there’s writing all over your cup. I will not remember you after I don’t work here anymore, and unless we become buddies on some level or another, I won’t care. I feel bad for people who NEED something like this to feel good about themselves. It’s not genuine satisfaction with life, but a temporary fix…

2- If you need a very specific amount of whatever in your coffee, perhaps you should park the car, get off your duff, and come in. There’s always little packets of stuff to sweeten your disposition before you encounter any other human beings…which isn’t a bad idea because you’d certainly hate to make someone you love hate their life because you’re so contentious.

3-Complaining about your coffee and how horrible the service was isn’t cool. I don’t care how many trendy people do it. Don’t follow their lead.

I think that’s it. I might end up erasing this post due to paranoia…and I hate complaining about work… we’ll see what happens. Anyways, I’m going to take a nap. Bless God!!!

…on a lighter note, I got another church tract today… this one was scary and had a story involving satanists, drugs, and prison rape. No joke. I think that I’m going to begin collecting these…..