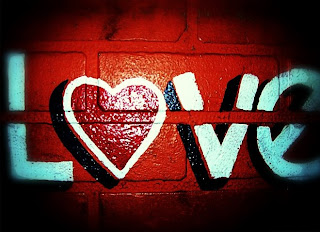 Inevitably after any meeting, or at the parting of company after some convocation or another, someone will be heard announcing, “Love ya guys.” This isn’t from one couple to another, or to a pair of friends, but this declaration of affection blankets everyone in the room. Why not? We’re called to love, aren’t we?

I struggle to respond to these indiscriminate disclosures. I don’t know why. Generally, I get away without saying anything at all, because I have already turned my back and am in the process of hotfooting it out of there. If such is not the case and I’m still loitering around, then I might unintelligibly mumble “love ya too” or just give the inaudible “Yeah”. I’m not bothered by the statement itself, but it causes me to conjure up images from two different cultures, which happen to clash in me.

I’ve made no secret of the fact that I did not grow up in the church. I came from “the world” in which the word love might have had more meaning…well, no…at least a different meaning. Some people abuse the word to get what they want. I can’t tell you how many times “I love you” was said with no more intention than getting someone into bed that night, or to get money, or really, merely prolonged attention from someone. In such cases, the word has been drained of all significance and really, should not be used by that individual ever again (mostly kidding). In other situations though, people love very few of those around them. The very fact that they’re even willing to make that statement shows that they hold you incredibly close to their heart.
That’s how I grew up. I didn’t throw that scary L-word around very much at all. I have relatives that I still haven’t said it to. Relatives I see on a fairly regular basis. I think that they’re supposed to be loved by default, aren’t they?

I hear the Yeah Yeah Yeahs’ song, Maps… “They don’t love you like I love you!” because that happy little trio seems to understand that you don’t just toss that word out like it’s everybody’s business! The inverse is true, I don’t see it often, but there’s a bumper sticker that says, something to the effect of, “I don’t discriminate, I hate everybody equally!” What power does that have? I think that people don’t understand that over-application of any such sentiment might rob it of any meaning.

I remember being in elementary school, when you got a list with every student in the classroom so that you could give everybody your Bart Simpson valentines, so that nobody would feel left out. Doing this and still managing to show favoritism was challenging. You didn’t want to give some other dude an overly affectionate valentine, you wanted your friends to get the best ones, and you certainly didn’t want that kid that sits at the end of your row to get anything. He smells funny! (Kids are so superficial sometimes-maybe that was just me) You wanted to make that differentiation between people and how much you like them, and how!

The flip side to this is that when you’re a Christian, you seem to love everybody. Or at least most people. In William Young’s The Shack, Papa (God) has this habit of saying, “I’m especially fond of him/her/them.” She (God is played by an African American woman named Papa) has to love everyone. There’s no getting around it, but God manages to explain that although His love for everyone is the same, there are distinctions as to why He loves us. We’re all individuals, and bring with us different abilities and personalities that God manages to adore us for. This is a good point. I’ve gotten in the habit of telling people, “Jesus loves you more than I ever could.” It’s a cop-out, I’ll fess up to that, but you have to admit, it’s a good one.

Jesus’ love is perfect. Mine is not. Someday, it will be there. Even the people that I really hold closest to my heart, that I think the world of, who I would jump in front of bullets, speeding trains and spiders for, Jesus loves more than I do. Obviously then, those incredible individuals who manage to irritate me, get in my way, who I could probably live without, who I occasionally want to yell mildly obscene words at (No worries, I don’t follow through), God loves more than I do, hands down. I’ll “let” Him win that one.

The differences between secular culture’s and Christian culture’s applications of that oh so profound L-word are just interesting to me. It’s incredibly profound that the world would treat love like it’s something “Special” in that limited-edition manner, while Christianity tells us to put our love in something like one of those lovely manure spreaders, so that it hits everyone. It seems like the converse would be true. We wouldn’t want to treat something so profound irreverently.
I say that, reflecting on my earlier sentiment that being too liberal with love would make it less special. Such is not the case though. The Shema, in Deuteronomy six begins in verse four by saying, “Hear, O Israel: The LORD our God, the LORD is one. Love the LORD your God with all your heart and with all your soul and with all your strength.” Our heart is a muscle. Muscles need to be used to grow, our heart is no different. We work our muscles in that ridiculous act we call exercise. Strength comes through repetition, or practice. This even applies to our soul (Mind, will and emotions-yes, they can all be impacted through practice, study, effort). Implicit in the Shema is that love takes a little effort. I think so, anyways. Along with that, there are different ways to practice. There are different people to love.
Practice loving everybody. Look for reasons to, or even try not to find a reason and see how close you can come to unconditional love. I think that at the point of salvation, we become exponentially more able to do this, but unfortunately, we still have our limitations. I write this not because I have hard time loving, I’m merely reflecting on differences and how they impact me, an perhaps I’m confessing to a little sheepishness in it all, but I love you all. I promise.