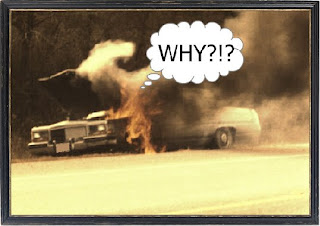 My speedometer showed very little change for how hard I was pushing down on the gas pedal. The RPMs shot through the roof, but without effect. The whine of my engine was louder than the whine of Davy Havok blasting over my stereo. A line was forming behind me, while I yelled at God for a hand in this situation. My car was breaking down.

I flipped on my signal and meandered over to the side of the road. For once, the shoulder was more inviting than traffic. I already knew the problem, my transmission went out. It happened a few months ago, and after a lot of money went into it, the problem had returned.

I was supposed to be at work shortly, and probably could have walked, but then I’d be late. The church wasn’t far from here, so I started making calls. At first, nobody answered their phones.I forgot about that noon prayer meeting that was going on. Enter in panic, famous bosom buddy to frustration. Fortunately, Seth realized that something was probably up because I never call him, really, I just text! He called me back and in a few minutes was on his way to get me and take me to a place where I could serve coffee to a multitude of seemingly angry people. Work wasn’t fun.

I called my amazing parents, who told me that if I could get a ride to their place, I could borrow my mom’s car. (How’s that sound for a young man? “You can borrow your mother’s car!”- I feel so grown up.)

After work, I sat around, wondering how I would ever get the twelve miles or so from where I was at to my parents’ house. Funny enough, I had two of my pastors in the store when I clocked off, but I didn’t want to ask either of them. Each was in his own meeting with someone else, and I didn’t want to interrupt. Truthfully, I just didn’t want to get a ride with either of them. So I grabbed C.S. Lewis out of my backpack-which I packed full upon abandoning my car. I grabbed the most important things out of my car before I left it for the tow truck… and I sat outside and waited. Seth and my golf clubs, which I also refused to leave in my car were long gone, in the opposite direction, so he wasn’t an option like he was earlier. I waited and pondered, not sure of how to get around. I thought about trying to hitch a ride. Just walking out to Eagle Road, putting my thumb out and perhaps showing a little leg, just to be adventurous…I wish I had done that. It would have made the story better. Unfortunately, there’s no dramatic conclusion to this story. My sister came and got me, and I went to my parents’ house.

They fed me, and I left with the Camry only to go back to work. A co-worker of mine didn’t show up, and they needed help, and I might need the money. The amazing point to this dull and dreary story is that I can’t function without a car. I live far away from everything I do. I’m independent, and am therefore dependent on a vehicle. My mother is in the exact same boat, but gave me her four wheels of independence so willingly. I didn’t ask, she offered. I would never do that. I can’t stand not having my car, or trying to bum rides (I demonstrated this earlier). Now comes the dependence on God speech, you saw it coming from a mile away…
A shepherd will break a sheep’s leg to keep it dependent on him. Generally this happens because the sheep strays a lot and is generally, a pain in the neck to the shepherd who will leave the rest to find one. Did God break my leg? No. He just broke my transmission. Again. TOTALLY kidding, but this was a good time to reflect on my dependence, in spite of how I typically think that I’m in control of everything in my life. I wonder if I’m a pain in the butt to my Shepherd. I thank God that at least He’s dependable. Unreliable people aren’t my favorite, I have to work late because of them.