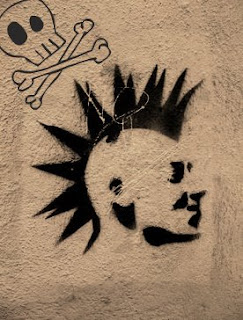 I had a lady come into my work the other day who managed to make me laugh a little, but also made me mildly self-conscious. She was ordering coffee, not making eye-contact with me, so I didn’t bother to offer any her direction, and managed to sound as condescending as possible while she talked at me. We were almost done with the pre-programmed conversation when we both looked up, almost at the same time. When she looked at me, she almost fell backward! She was shocked by something. I was instantaneously annoyed because I knew it had something to do with me. “Do you go to Capital?” She inquired, seemingly like she already knew the answer.
“Yes, do you go to Capital?”
“Yeah, I’ve gone for about eight years now.” She looked smug, like it was an accomplishment to stay at one church for that long. Maybe it is these days…
I’ve said it before and I’ll say it again, if you want to find a Christian, look in a coffee place. Capital is the name of the church I attend, or should I say, “we” attend.
“I could tell you went there, just by your hair.” She was amused with herself.
“Really?” This came out as more of a whine than a question.
“Yep”
The conversation then went to the other instinctive direction, which includes questions like “What service do you go to?”, “What areas do you serve in?” and the like. Every church attending Christian asks these types of questions when they encounter one of their own. It’s the equivalent to dogs sniffing each other to get a better understanding of the situation.
Anyways, the conversation isn’t what was important, the element that stands out to me even now was that I look like I go to my church. Holy conformity Batman!
When I became a Christian, I prided myself on being different from the rest. My pants sagged down to the middle of my thighs, I had holes in my ears that one could easily see through, and I had long, shaggy hair. I miss the old me sometimes, I looked so rebellious and fun. Now, I have an off-centered, goofy little faux-hawk and I look like everybody else apparently. Sad day.
I’m not that worried about it, only sometimes when I’m being entirely self-absorbed, which is actually less often than one would imagine. That said, while I was handing out hot cups of morning cheer alongside pastries, I had to ponder what made me change. I think that it was awkwardness. Just a few stories to help you understand…

I knew it was going to happen, but didn’t know that it actually played out like I had predicted until recently: I was doing baptisms at the end of service and had grabbed a towel and the shorts, but managed to forget to grab a shirt when I left my house. Obviously, I had no intentions of showing off my four chest hairs and skin that hadn’t seen the sun in quite a while, so I went with the shirt that I was wearing underneath my collared shirt, which happened to have a big skull on it. C’mon, it was “Obey Propaganda”! Well, I go and I’m dunkin’ people like it’s nobody’s business, in the name of the Father, Son and Holy Ghost, and it was so awesome, I forgot about the shirt, until I looked up at our great big screens and saw my half-wet self on the giant screens hanging above my head, the skull had to be about a billion times its original size. -Oops! Maybe I should have turned it inside out!
I never heard anything about it until I was at camp, when a friend mentioned that my senior pastor’s wife asked if there was anything wrong with me that night, because I was wearing something so dark. No, I just don’t think sometimes, I appreciate the concern though!!

Another example, actually with the same brand of clothing happened with my buddy Shane. I got this shirt with this really awesome design on it that covered the whole thing. It was great. If you looked at it from a distance, you could see the outline of a skull, which was even more awesome! He complimented me on it out in the parking lot after work one day and asked what the picture was. When I stepped back and showed him, the response was a thoughtful, “Oh.”
The stories go on and on about the awkwardness, and even include little Kenyan children making fun of me for having earrings, so here I am in all my Urban Outfitter, Fantastic Sams, my pants are actually at my waist glory. Just like everyone else.
I think that looking like everyone else was the easy way out. If I looked like I did before, I bet that people would witness to me more than they do now, which is funny and awesome at the same time. I also wonder if there might be a glass ceiling somewhere in the ministerial chain if people choose to stick with certain appearances. Maybe or maybe not, and perhaps for reasons that aren’t overly obvious as well. Implicative in that statement then is my belief that Christians still stereotype. I know that I do, it just makes things easier.

I don’t have kids, I have a Blog. And Other Reasons Why God’s Word is Important