But I Already Know That… 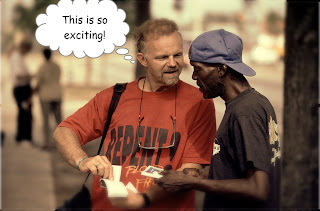 I’m curious to know what a Christian is supposed to look like. I understand that the Bible doesn’t set out any standards like a dress code or anything like that, but can you tell just by looking at them? I mean, you can tell if someone is a Mormon missionary, they have a black suit, white shirt, whatever for a tie, and you can’t forget the bike helmet and backpack. So what does a Christian look like?

Sounds really shallow, doesn’t it? I’m curious about this because recently, I have been witnessed to a lot. Part of me thinks this is great, I’m so glad people are out there trying to share their faith with those around them. But why me? I have come to the conclusion that I look like I’m not saved. What else could there be? I was walking across campus not long ago when this guy locked on. I could see it in his eyes, he was going to talk to me. I didn’t bother to speed up or anything, although it would look funny if he were chasing me yelling, “Jesus loves you!” while I hightailed off screaming at the top of my lungs.

But once he had targeted me, it was a straight shoot to get to where I was, he timed it just perfect to even be in step with me (Impressive, he’s done this before) and that’s when he asked, “Do you know Jesus?” I was excited to tell him yes. From there he invited me to his Christian club. It was a a good conversation, but I’m still curious, why me?

I have also been witnessed to at work several times recently, mostly with little pamphlets and tracts. I have a couple of theories why I look like a good person to witness to. First, I don’t smile. At least not naturally, I tend to scowl more than anything else. It’s an endearing quality, I promise. But who else do we witness to but those who don’t look happy? “Jesus will give them a reason to smile!” I believe this, but please read my first several posts and then we’ll talk about that! I’m not a fake-happy person. I fight those individuals. Second, location has to play some kind of role. I work at a really busy coffee place, and Christians have voted and declared that caffeine is their approved drug of choice, so a lot come in. The high traffic just has so many people coming and going that it is inevitable for me to encounter a fellow Christ follower. My other location is my incredibly liberal university, so we’re all heathens there, aren’t we? Christians at Boise State look around assuming they’re the only one and think, “The harvest is plentiful but the workers are few” so they witness to everybody.

The last reason why I get witnessed to is I’m approachable. I am the absolute obverse of intimidating. I frequently lament this quality, but I’m over it for the next hour or so. People aren’t afraid to speak to me, at all. It could be that I’m not incredibly tall, or that although I’m good-looking, I’m by no means stunning (some would debate that statement). Sometimes it’s easier to witness to someone who’s unattractive or shorter than we are. I know I’m not alone in that sentiment, as incredibly superficial as that sounds.

Either way, I walk around looking at people wondering if they know God. I think I’m more inclined to speak with those that look like they don’t, so I can’t complain if someone does it to me.

Leader of the Pack

Life of the Believer Part 5: Meaning