Shots in the dark 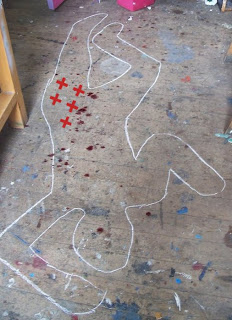 The remnant of sunlight burst off the horizon leaving us in an amazing twilight scene with only a touch of orange-red that quickly gave way to purple and black accented by the stars. This time of night is my favorite; you can still see and run about in short sleeves, but the dark is quickly encroaching and bringing with it the cool of night.

As romantic as that sounds, nothing of that sort was going on tonight. I tromped over to Shane’s car with my little spring-loaded airsoft pistol and protective glasses, in the mood to shoot someone. Anyone. A bunch of my friends get together every Sunday night to have an airsoft war and shoot each other up. It’s fun. I haven’t made it in a long time for two reasons. The most important being that I generally have to be at work by four-thirty in the morning every Monday. The next that I have a puny little gun compared to pretty much everyone else. Shane was sporting his automatic machine gun-looking piece that I knew I would end up on the wrong side of. I just knew it.

There were relatively few people here tonight compared to usual, but that was fine by me, the other people that come to this shindig also have really nice guns that would more than likely leave their mark on me.

Before we even really got started, a lady rockin a mini van showed up. She and her sweatpants got out of the van, saw a couple of guys with guns and masks on, ducked and ran. We’d discover within minutes that she had called the cops. Their arrival marked that this truly was a Christian event. Somehow, whenever we have fun, the police show up. I think it’s an interesting commentary on our society because nobody thinks that good, wholesome fun can be accomplished without doing something stupid or illegal, so the fuzz always shows up. We were just told to keep it in back though, which was fine. The games then commenced, and we were shooting at each other.

I’ll begin by confessing that I’m just not good at this game. I’m typically not good at anything even insignificantly athletic, which is sad. I just never have been, and it sucks. So we get playing, and every game I got shot by Shane. At least I think it was him. It was bloody annoying!
I’m 24 and honestly think that I’m fairly mature for my age, but when it comes to competition like airsoft and dodge ball, the bratty little child comes out in me. I get shot and honestly want to cuss. I can’t help it. It’s especially bad when the shot actually hurts.

Airsoft pellets, BBs whateve they’re called don’t hurt from a distance, but up close they can make you bleed if you have a nice enough gun. It feels almost like one of those dreadful “horse bite” pinches that kids used to give each other. It hurts, then you’re instantly angry. You want explosions and calamity as a result of them. You wan to hurt the person who did it to you too! I’m merely being dramatic when I say this, but I really genuinely hate it for a few seconds, then I’m better.

At one point, I was hiding behind a stack of wood, waiting for someone to get out to where I could bust a cap in their sorry backsides when over the loudspeaker system where we play, I could hear our host informing us we had thirty seconds of game left.

With pressure like this, demonstrations of bravery aren’t uncommon. The opposite team rushed out from behind their wood piles and other hiding places and scampered to where I and my teammates were. I leaned out to my right to shoot someone, again, anyone. Suddenly who pops up behind me but Shane. He unloaded five rounds right at my backside! Instantly I started flailing and screaming “HIT! HIT! HIT!” I wanted to amend that word with one more letter to make me feel better, but I managed to avoid it. What followed still has me feeling sheepish, I kicked the pile of things that had until then provided shelter from the barrage of little plastic balls that wanted to hit me and started yelling at my assailant. I wanted to pistol whip him!
Again, after a pretty childish display and a strong desire to beat the snot out of someone, I was fine. It was just me, in the heat of the moment. I’m really not violent, I promise. I’m not coordinated enough to be successfully violent.

Back inside, I told Shane how many times he shot me, and by this point we were both able to laugh about it, although more so him than I . It was already midnight, so Nate had to close his shop and we were all on our happy little way home.

After a closer examination of my posterior, I considered sending a picture message of the damage, but my imagination got the best of me. No need to have scandalous photos of my backside in circulation!
…especially after I become a famous TV evangelist with gold jewelry. Lots of it.