Breakthrough OR Jesus Take the Wheel…before I go to jail. 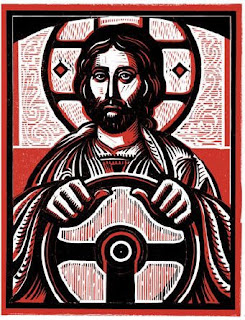 Driving to church can be one of the most infuriating drives for my week. Only on Sunday, it’s never as bad any other day of the week. I feel like that one guy in the beginning of the movie Office Space, only minus the swears.
There are two main roads that I take to church: State Street and Eagle Road. Both have a speed limit of 55 mph, but getting to that point is always such a struggle. I weave in and out of cars as much as I can, I yell over the Sunday morning worship show that the Effect plays each weekend, clench my fists on the steering wheel so hard that my knuckles turn white, and grit my teeth between yells. I’m only mostly kidding. I just don’t understand why it’s so difficult for people to do the speed limit in general, but I feel like this issue becomes worse when it comes to Sunday morning.

I bet that’s when the Carrie Underwood chick wrote that wretched song, Jesus, Take the Wheel… Originally the following line was, Because if You don’t, I’m going to blast this expletive-blankety-blank in front of me to... Yes, she does seem like that kind of girl.
While we’re talking about crappy music, what is it with bros driving around ghetto-blasting Fergie …”G-L-A-M-O-R-O…first class…” or “Keep bleedin, keep keep bleedin on? in love?” I get the words to that song mixed up. What I’m asking is an incredibly sexist question, why are these guys who are rolling around with popped collars and giant fake diamond earrings playing what I feel is chick music so bloody loud? I would be embarrassed if I were them!
Anyways, nothing is better than getting to the front of a line of cars who aren’t doing the speed limit. Every time I get there, I sigh, wipe the sweat from my brow and think, “This is what breakthrough is like.”

Think about it, when we experience breakthrough in our lives, it’s after we can’t get past someone… who potentially has a 2c license plate or something. You have to live in Idaho to get that joke, which is only mildly amusing because of the truth behind it. In spite of the abuse it’s gotten over the years.

Here are just a few examples of breakthrough that we can experience…
Financial breakthrough: finally you can pay off those credit cards you shouldn’t have signed up for and still have some extra cash.

Relationship breakthrough: finally she understands what you mean when you say…
Procreative (is that even a word?) breakthrough: you two are going to have seventeen babies at once.

You see, breakthrough is getting through what might have felt like a glass ceiling, or a membrane. Something that you might or might not see, but it just wouldn’t let you move any further than you were. Like cars in front of you that don’t move fast enough. But once you’re past it, you move so much faster than you were and do so much better than before.
What’s sad about this though is I’ve probably cut off at least three different cars that are heading to the same place that I am. I see them as I walk through the parking lot and decide I had better run. They’re still annoyed and haven’t got their Jesus for the week and quite frankly, I might die.